Written by
admin
Posted in
Uncategorized 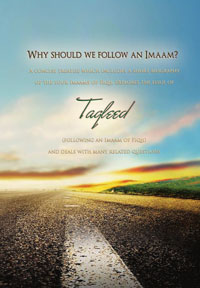 The fitnah of ghair muqallidiyyat (abandoning the following of a mazhab) is an extremely dangerous and overwhelming fitnah of contemporary times. Generally, simple-minded youngsters as well as unwary Muslims, who are uneducated of the basics of Deen, but have the desire for practice, fall prey to this fitnah.

The picture painted by those who abandon following of mazhabs seems very attractive and appealing to the layman as he is invited towards following the Qur’aan and Hadith directly opposed to following an Imaam. Furthermore, a calculated effort is being made to cause the Ummah to abandon the safe path which the Ummah treaded upon for many centuries. As a result, doubts and suspicions are instilled regarding the great Imaams, the pious of the past and at times even regarding the illustrious Sahaabah (Radhiyallahu Anhum)